With respect to confidentiality, and the laws of FERPA – Family Education Rights and Privacy Act, names of students and families have been changed to protect their identities and confidentiality.

Anna is 18 years old. In three months, she’s 19. She walks into the room with total confidence, and sits in her chair beside the wall, where she plugs in her iPad. She wears purple sweatpants with pockets for holding her Clementine tangerines that will spoil in her backpack before she ever gets a chance to eat them. Her pants are held up by a drawstring, no buttons or snaps, and they match her hair: bright purple, like she dunked her head into a bucket of neon purple paint over Christmas break. After Thanksgiving break her hair was pink. Her neon green noise-cancelling headphones hide, though not very well, her ear-buds. She scans through the YouTube app for clips from Sofia the First, or Phineas and Ferb, or Tom and Jerry. This is Anna. And today, she is agitated because she cannot locate her purple hairbrush. “Purple hairbrush!!” She shouts. “Purple hairbrush!” It’s not just the sheer volume of her shout, but the pitch and intensity that send the rest of the class reeling into anxious panic. One student covers her ears, and gives me a look that says, “Are you going to do something about this?” Another pulls his hoodie over his head and yanks on the drawstring until only his nose is visible. I ask one of my para-educators to take the other students out of the class, while another para-educator and I, the one I like to call the “Anna-Whisperer” try and use everything we know about Crisis Prevention Intervention (CPI) and Autism Spectrum Disorders (ASD) – swimming in acronyms - to negotiate with Anna so that she is convinced that she doesn’t need her purple hairbrush that is no where to be found.
_____________________________________________________________________________________________________

“How many of you have little siblings?” I ask looking around the room at the two dozen faces returning my gaze. They stare in wonder, confused why this lady is speaking today in their sculpture class.

“This is Mrs. McCracken,” says their teacher. "She’s here to explain some things about Anna."

Right. I’ll do my best, I think. Half of the class raise their hands in response to my question. “What happens when your little siblings don’t get their way, or something happens that they weren’t expecting?”

They ponder very briefly, and several respond, “They throw a fit.”

“Yes,” I say, “They throw a fit. And why do they do that?” I ask rhetorically. “Because they don’t understand or they are unable to communicate their frustration because they just don’t know what to do.”

How can Autism be explained? Moreover, how can it be explained to millennials whose vision extends not far beyond their fingertips and their mobile devices? Again, I’ll do my best.

“Autism is a developmental disability. We call it a ‘spectrum’ disorder because it varies in severity from person to person on a scale described as ‘mild to severe.’ Some people with Autism have under-developed social abilities, and struggle to understand how to interact with others, while they have typical academic learning abilities. Still others have severe delays in development that affect their ability to communicate. Sometimes this is a physical delay called apraxia where they literally cannot form the words. Other times, it is a processing delay, where they are capable of forming the words, but are unable to put together sentences and have conversations. When someone cannot communicate in a way that can be understood by others, they resort to behaviors to get their needs met.”

“Why does she wear the green headphones?” one asks.

Imagine one day waking up Super-Man. You can hear all the cries of the world at every moment. The sadness, the pain, the suffering one would hear if they could hear everyone talking at once all around the world would be overwhelmingly exhausting. Welcome to Anna’s world. Not that she has super-sonic hearing, but she has super-sensitive hearing. She hears the buzz of the florescent lighting. She hears the pencil scrape across the paper… times 25 students. She hears the swishing of jeans as students move in their seats, and she hears the beating of her own heart, and her breath. She hears this all at once, and she cannot differentiate one sound from another. I hear it too, but I know what it is. I know what to expect and how to handle an unforeseen situation with grace. I know how to ask for help when I don’t have all the answers, and I automatically recognize the solution when it is presented. Anna knows how to cry. She knows that if she cries and screams at the top of her lungs, someone will respond, and her need will be met. She knows this, because it works. Behaviors don’t change if they work.

My team and I have spent the last five months problem-solving this child. Child. She’s no child. She’s technically an adult. Did she vote in the last election? No. Does she have her driver’s license? No. Is she going to college in the fall with her peers? No. Will she work after high school? No. Anna has the cognitive functioning of a three-year-old. And yet, I have a three-year-old daughter of my own who has more language and problem-solving ability than Anna. She has pushed me far beyond the scope of where I thought I could be pushed as an educator. She’s not the most difficult student I have ever encountered, but she has stolen a piece of my heart. Her situation is far from “typical.” Her home life is constantly in upheaval, and her family is vastly under-resourced. She came to our district after having moved half a dozen times in two years. Not that we could forget, but she’s also a student with autism who struggles with change. I have reached into my “magic tool box” of SPED (special education) tricks and used everything I could find. I have utilized the expertise of our BOCES (Board of Cooperative Educational Services) BCBA (Board Certified Behavior Analyst) to problem-solve through some interesting behavioral situations with Anna. Thank God for my colleague and friend Cristina, the Anna-Whisperer. She seemed to connect with Anna on a level no one else could. She made little miracles happen on a daily basis. That, no one expected.

We have been working with Anna to “isolate the target of her communication,” which means getting the attention of the person with whom she intends to communicate. We spend a lot of time “sabotaging” situations to force our students to respond. We had been working with Anna to use some sign language as prompts to speech. She would sign, “I want” and then say the words, “I want,” and fill in the blank for the item she was requesting. One day she really wanted her iPad back after completing an assignment. And without prompting, she looked up at Cristina, deep brown innocent eyes full of purpose and she signed and said the words, “I want iPad.” 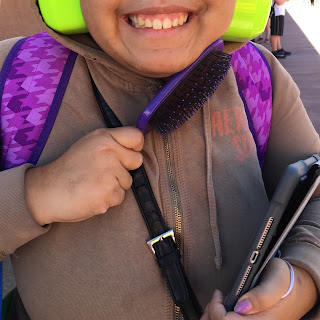 We stand together at the bus stop after school, waiting patiently while she listens and watches her cartoons on YouTube. She is content for the moment. She is loaded up with all of her belongings: her purse full of sanitary pads, crayons, and board books; a blue Wal-Mart canvas bag full of Clementine tangerines, coloring books, stuffed animals and a change of clothes; and her backpack with every school supply imaginable, and stuffed so full, it no longer zips closed. She sways easily from side to side, and chatters to herself unintelligibly about her show. I watch her sweet face, and I see her eyes glance down to her Wal-Mart bag. She opens it gently and looks at me. In a tiny, quiet voice, she says, “Oh! There it is,” and she pulls out her purple hairbrush. I say, “What!? Are you kidding me?” She shows it to me, and I take her photo with it so I can show my team that I’m not going crazy when I share the story with them later. She grins like I’ve never seen her grin before, and she clutches her purple hairbrush like a long-lost friend. Delighted with herself, she hops onto her bus, waving enthusiastically at me through the dusty window, still listening to her cartoons, and grinning ear-to-ear.